Hey all, it's been awhile. Funny how life can jump up in get in the way. Anyway, here's a little something I wrote about motorcycling. Hope you like it... 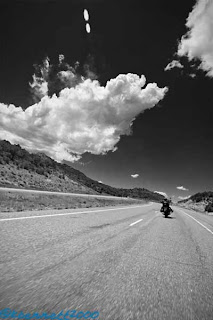 A motorcycle has an amazing ability to bring people together. The bonds formed between those that have the love of the machines in their heart can be indescribable, and of the most indestructible in life. Sharing miles with people you love is an amazing experience, but sometimes it's easy for me to forget what the real power of the machine is.

All it takes is one little misstep, one little moment where life pulls the rug out from under you unexpectedly and you're reminded all over again that the real power of the bike is that it's a mechanical device that can heal a human heart...

Late night. We had laughed, we had talked, we had shared. A calmness and connection had grown inside me, the type and strength which I had always believed to be real but never experienced first-hand. We crawled into bed, she was wet, shivering, and pressed her naked body against me. I held her close, she held me closer and I felt electricity between us. She warmed, we talked, made love and held each other in the darkness. A part of me that I'd put away on a shelf years ago came into view and I began to feel hope.

There was an air of worry, she asked if I was serious. I told her of the many that I'd found but failed to connect with, and I told her of the few I'd found and really connected with, who had all left anyway. I was serious - you don't get this far just to let go. I thought she agreed. She said as much, and she made me feel as much too. Across the dark a pinpoint of light appeared, the light of a distant sun and I began to pull it towards me, just to have something other than the void surrounding me.

I held her close and fell into a meditative sleep. I felt bliss and peace and like I was sleeping for the first time in years. In the middle of it all I awoke and saw her half-dressed silhouette fumbling in the darkness for her clothes. She talked of some appointment the next morning, first mention of it in my recollection. She was out the door before I knew what was going on. 12 hours later a message - "I need some space. It's not your fault."

Most people don't get it, can't justify the risk of doing it. I can't justify the risk of not doing it. Others think they get it, they try it, some even pretend really hard - but they don't end up sticking around. A small few really get it. Sometimes all it takes is a glance to recognize a kindred spirit or a shared soul across a crowded room; the mutual feeling of being born a few hundred years too late, or perhaps too early. Some people do it to fit in, we do it because we've never fit in.

The thump of the engine warming up is less than audible. You hear it in your chest and you feel it with your body. Today I ride alone, I seek no company, no companions, no attention, just a cathartic dance with my Love. Sometimes fast, sometimes slow, but always in perfect rhythm with the beat of my soul.

Disappointment, self-doubt and sadness predominate the miles it takes to empty my tank for the first time. I sit atop my perch, a fire-breathing demon below me and watch the scenery pass by. I see the other people travelling through it and it all feels so foreign, like a distant planet complete with unknown landscape and strange inhabitants. My machine & I, ambassadors from a world unknown on a long-forgotten mission...

I look down, time for fuel. A small station tucked away in the folds of green rolling hills. Mountains back the scene flanked by an angry storm front and violent winds tear upon the landscape. Desolate, cold and unknown. Fuel splashes into the tank as the pump rhythmically clicks away and in a flash misery, loneliness and doubt transforms itself into anger, scorn and rage. The wind is fierce as the machine fires up and she seems to sense immediately the change in our mission. She had been calm and reassuring so far, a gentle rumble's soft voice like a mother calming her child from the storm. Now she's a Valkyrie, the angered spirit of the goddess and the strength of the winged Pegasus encased in steel. The Old English account of her namesake feeling so appropriate as we roll out and leave the filling station behind us. 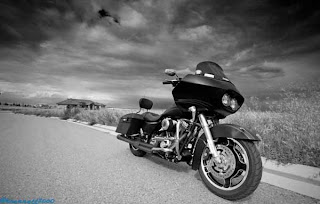 They were loud, yes, loud,
when they rode over the burial mound;
they were fierce when they rode across the land.
Shield yourself now, you can survive this strife.
Out, little spear, if there is one here within.
It stood behind lime-wood, under a light-coloured shield,
where those mighty women marshalled their powers, and they send shrieking spears.

Winding roads lay ahead but first a straightaway up a large hill. The wind blows directly at us as if to restrict our passage into the hills. My Love laughs defiantly at the wind's feeble attempt as I prod her on, ever faster, ever louder. An old song comes through the speakers and I realize it was written long ago for just this moment. Now it's the beat that drives on us, screaming violently into the abyss.

Dark clouds line up over the hills and the wind is relentless. As we crest the hill our speed has blurred the lines of the road. We both know we're pushing too hard and we both want more.

Sharp bends and turns lay up ahead. We both know it and the anticipation builds. Flecks of rain strike exposed skin like a thousand stinging needles. The Gods have seen our approach and they are not happy. My Love never flinches and her confidence drives me on. I smile into the wind, you'll have to do more than that to impede us...

Feelin' that it's gone
Can change your mind
If we can't go on
To survive the tide, love divides

The first of the bends is within site and we slow up just enough to allow ourselves to explode coming out of it. I push, she leans, we roll. The stripes rush past my face, my feet, the horizon tilts with distinct authority. Now's the proper time to talk to one's self. "Look up. Look through it. THROUGH IT!" I shout in my mind. The apex and rollout come into view and my hand pulls back. She roars, we fly. The horizon straightens back out, the wind screams its angry curse at us and my Love roars back, uninhibited and unafraid.

A long, uphill sweeper. I throw her down hard, floorboards scrape, I feel the texture of the road pounding its way into the souls of my feet and sense the angry demons awaiting the chance to feast of my carcass. Today shall not be their day though. The beat drives itself mercilessly into my brain as I'm pulled through the corner and up the hill. The power is relentless and constant is the feeling in one's chest that the machine would rip itself from the body were it not so perfectly aligned with the soul.

The corners come rapidly and with ease now. One in endless succession with another. We up the ante, before we merely defied the Gods, now we openly challenge them. We lean hard, we leave sparks, we consume every inch of the road. We embrace and perform a loving waltz with our insanity, with our very mortality. The spears of rain are frequent now and skin burns itself numb to the sky's angry assault.

If you must go, I wish you love
You'll never walk alone
Take care my love
Miss you love

The Gods are furious. What punishment can be imposed on souls so wicked, so tortured as to challenge their power so openly?

You know I still love you
Though we touched
And went our separate ways...

The winds die down, the clouds begin to recede behind the mountains and the stinging arrows cease their attack. The winding road brings us to small town by a lake in the hills. A perfect place to stop and take inventory of my soul. I know she's still in there, and probably will be for some time, but my Love has been there for me and helped to put miles between myself and the thing that hurts so much right now. The anger, the scorn and the rage subside like the storm. New feelings are likely to take their place, but my Love is prepared for just such a possibility.

The miles we've travelled can't be measured on a map, and it can take an eternity to walk them alone. But if you're of the proper soul there's a machine that can carry you and make you glad to be alive at the times you wish you weren't. I am forever grateful for the things my Love has given me. In a life of surprise, joy, anguish, belonging and solitude she's been a constant, a friend, a companion and more.

What lies up ahead is unknown, how I get there isn't.

Original photos only.
Feel free to throw up a link.

Ride with a camera. 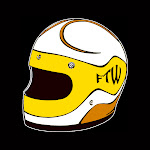